Pre-processing, and GRASS commands used to locate optimal routes as presented in the talk this afternoon. Presentation can be found here. Hints and comments are inline with commands. Looks like there was some coverage of this talk in the Wired Online Magazine .

General concept: want to plan a wilderness trip, deviating from the main trail, hoping to visit numerous lakes. In the notes, the lakes that will be visited are called points of interest (poi). We would like to automatically locate the paths between points of interest and the trail which require the least amount of effort: i.e. minimizing the total change in slope encountered while walking. This makes sense, as we all know that walking uphill or down steep hills is hard. Furthermore, walking a long way up or down a steep slope is even harder. Thus, a simple slope map can be used as a travel "friction" map for the input to the command r.cost. Additional sources of "travel friction" can be added to this slope map as follows:

Something like NASIS-lite: An alternative to PedonPC for scientists and educators; with the ability for simultaneous entry by multiple operators.

Overview
Written in PHP, with data stored in PostgreSQL tables, this system allows one to keep a database of properties that are commonly recorded on the two-side NRCS pedon description form. Database structure is similar in nature to SSURGO v2.1 products, and all codes are based on NASIS speficications. However, column names are not the same as NASIS column names. PedLogic was used to digitize over 300 pedon description forms from a Soil Survey project in Pinnacles National Monument, and supported several investigations. In addition, pedon diagrams are constructed from this database and used in a demonstration of Soil Survey data, soon to be available in the PINN visitor center. PedLogic is currently being used to enter nearly 800 pedon chemical and physical description forms associated with the Soil-Veg project.

More often than not geographic data come in a format that is essentially two-dimensional: i.e. raster grids and vector points, lines, and areas with only (x,y) style coordinates. GRASS provides a convenient 3D data type for vectors, but it is not common to get data that contains a z-coordinate from the start. The command v.drape can be used to convert a 2D vector (line or point) into a 3D vector by sampling a DEM at each vertex. v.drape is included in GRASS 6.3 and newer: link to manual page.

Thanks to Markus Neteler for initial insight on how to build an appropriate POVRAY script file.

100 iterations of mass removal based on preferential flow of water as calculated by r.topidx in GRASS. Notice how landform is cutdown most in stream channels, least at the ridges. The basins between ridges appear to "fill" with sediment near the 50th iteration as the entire landform is lowered to sea level (0m). Absolute change in elevation is visble in the elevation profiles below. Example GRASS commands below. Here is a link to a movie, containing all 100 iterations. 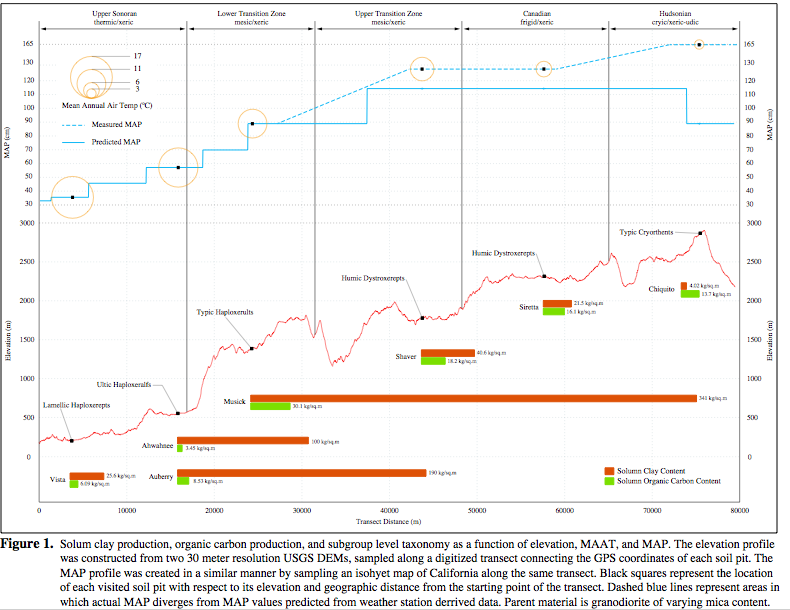 Quick trip to the Ione formation

There are few opportunities to see an Oxisol outside of the tropics. The Ione soil is one example of an Oxisol formed in a tropical paleoclimate, protected by a layer of ironstone, and later exposed during recent times. This soil is thought to have originally formed from highly weathered alluvium washed down from the original Sierra Nevada (Eocene age) and deposited in a low energy environment. Subsequent uplift coupled with repeated wetting and drying cycles transformed plinthite near the surface into ironstone. This extremely hard surface of iron stone protected the underlying material from erosion, and was eventually buried by cobbly alluvium of similar age to that of the China Hat formation. Later uplift of the Sierra Nevada and the resulting erosion of overlying material re-exposed the Ione formation materials. Recent colluvial deposits have created a considerable layer of overburden, masking the properties of the original Ione material near the surface. The subsurface of this polygenic soil contained oxic horizons: a horizon with less than 10% weatherable minerals in the sand fraction and a high content of low activity clays such as kaolinite (Buol et al., 2003). In addition, redoximorphic features such as iron concretions and nodules were found throughout the oxic horizons. Concentrations of hematite, goethite, and plinthite were also visible in the oxic horizons (See Figure 1). For the classification of Oxisols, an otherwise xeric soil moisture regime is recognized as ustic in the Keys To Soil Taxonomy 9th edition. This characteristic coupled with a base saturation greater than 35% is recognized at the great group level classification of this soil: an Eutroustox.