Some Ideas on Interpolation of Categorical Data 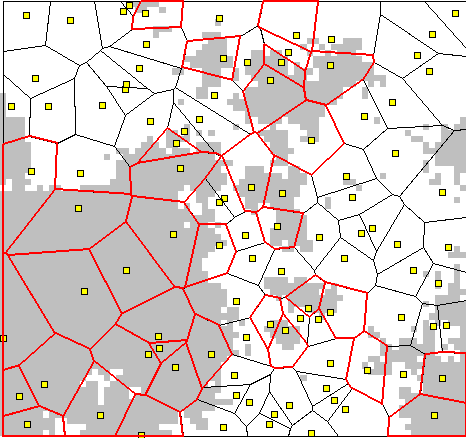 I had used voronoi polygons in the past to display connectivity of categorical data recorded at points, even though sparsely sampled areas tend to be over emphasized. Figure 1 shows the fake spatially auto-correlated data (grey = presence /white = not present), sample points (yellow boxes), and voronoi polygons. The polygons with thicker, red boundaries represent the "voronoi interpolation" of the categorical feature.

Python Image Module Example: How much ink on that page?

Premise:
Thought it would be fun to compute how much ink a given poster requires, per unit area of paper, when sending to the department large-format printer. The Python Imaging Library provides several modules suitable for low-level operation on image data. A simple (and probably very inefficient) script was developed to compute the white/black percentage of an image. A script like this could be used to adjust a per-poster "ink cost", which would hopefully prevent people from wasting ink. Obviously, this computation is scale-dependent, so standardized rasterization parameters would have to be set in order for the "ink cost" calculation to be fair. More generalized or efficient approaches are always welcomed.

Premise:
Updated version of a previous attempt to use a traveling-salesman approach to visiting data-loggers in steep terrain. This time we use a vector/raster approach (v.rast.stats) to compute the total "cost" incurred along each segment of a network connecting all of our data-loggers. Although this approach requires more computation time (v.rast.stats is slow), we can generate a more detailed cost surface to model movement. In this case we are using a cumulative-traversed-slope derived cost, with a 90% reduction along a local road.

Premise:
Several data-loggers in steep terrain; how can we visit all of them in the most efficient manner such that we traverse the least cumulative slope gradient? In a sense this is a traveling salesman style problem, with travel costs defined by slope gradient. The v.net.salesman module in GRASS can be used to compute the optimal route between data-loggers, given: 1) a network of lines connecting all points to be visited and 2) transferal of slope cost information to the network. An example approach is listed below. Note that due to a bug in v.net.salesman, we need to use one extra step-- details below.

Premise
Simple demonstration of working with time-series data collected from Decagon Devices soil moisture and temperature sensors. These sensors were installed in a potted plant, that was semi-regularly watered, and data were collected for about 80 days on an hourly basis. Several basic operations in Rare demonstrated:

I have always had a hard time thinking about various parameters associated with random fields and empirical semi-variograms. The gstat package for R has an interesting interface for simulating random fields, based on a semi-variogram model. It is possible to quickly visualize the effect of altering semi-variogram parameters, by "seeding" the random number generator with the same value at each iteration. Of primary interest were visualization of principal axis of anisotropy, semi-variogram sill, and semi-variogram range. The code used to produce the images is included below. For more information on the R implementation of gstat, see the R-sig-GEO mailing list. 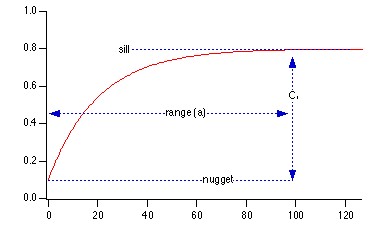 Premise
Setting up sampling designs is a non-trivial aspect to any field experiment that includes a spatial component. The sp package for R provides a simple framework for generating point sampling schemes based on region-defining features (lines or polygons) and a sampling type (regular spacing, non-aligned, random, random-stratified, hexagonal grid, etc.). The rgdal package provides a set of functions for importing/exporting common vector data formats. This example demonstrates simple import/export, iterating over sp objects, and reconstituting new objects from lists of objects. A more complex sampling scheme is demonstrated here.

The Experiment
It was necessary (for the purposes of this exercise) to generate some grouped data worthy of a creative panel function. An experiment was designed to test the coordination of 4 individuals (each a panel in the figure below), as a function of "clarity of mind" (symbol color in the figure below). The actual details of the experiment can be deduced from the attached data file, and careful inspection of the resulting plot. A similar experiment was conducted some time ago to demonstrate the Spatstat package in R. 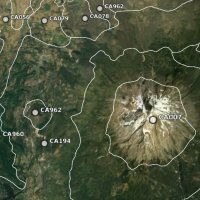 A short update to a previous post on the visualization of NCSS/USDA soil survey data in Google Earth. The use of the NetworkLink construct, combined with the spatial indexing present in PostGIS, allows for very rapid lookup and presentation of this massive database. Scale-dependant switching between the detailed (SSURGO) and generalized (STATSGO) databases is done through simple area calculation in PostGIS.

Here is the link to the KMZ file. Here is a link to our conventional viewer application, based on Ka-Map / Mapserver, using the same PostGIS back-end (previous post on this). This PLSS KML file is very useful along-side soil survey information.

These resources are helpful, but a current, detailed (state-level) map of magnetic declination would be interesting.