Analysis of SSURGO Data in PostGIS: An Overview

News
It looks like the NCSS has constructed a web-based, SQL interface to their main database. This new tool was recently highlighted in issue 40 of the NCSS Newsletter and looks like a promising new tool with good documentation. A listing of "web services" offered by the NCSS is presented on this page.

Overview
The analysis of SSURGO data is complicated by a series of hierarchical, one-to-many tabular relationships between spatial and attribute data. Understanding the structure of the SSURGO database is critical for correct interpretation and aggregation of soil properties. Before undertaking any SSURGO-based analysis please take some time to become familliar with the details on the product, including intended uses, minimum mapping units sizes, and other important details. In addition, becoming familliar with the SSURGO metadata is a must. The metadata page includes detailed descriptions of table structure, column names and units, as well as important information on the sources of much of the tabular data included in a SSURGO database.

SSURGO data can be downloaded by survey area from The Soil Datamart, with spatial data delivered in shapefile format and attribute data delivered as plain text. Unfortunately, an M.S. Access database template is required to utilize SSURGO attribute data as delivered from the Soil Datamart. For assistance with this procedure please see the NRCS SSURGO page. Using this approach, most analysis of SSURGO must be done survey-by-survey within a GIS environment. For general instructions see this document.

Several online applications allow for simple interaction with the SSURGO database without the need for a GIS or RDBMS knowledge. Some examples include:

An Open Source Approach to SSURGO
We have developed an alternate approach to working with SSURGO data using PostGIS, a spatially-enabled version of the popular and open source relational database management system Postgresql, to store all spatial and tabular data for 138 survey areas. This approach facillitates rapid access, analysis, and aggregation of over half a million soil polygons. SQL (structured query language) is used to directly interact with both soil spatial and attribute data. If other forms of spatial data are imported into PostGIS (such as landcover, climatic data, etc.) nearly all spatial and attribute analysis can be done entirely from PostGIS. A series of examples illustrating common tasks will be presented in the following pages.

Notes on the Format of SSURGO 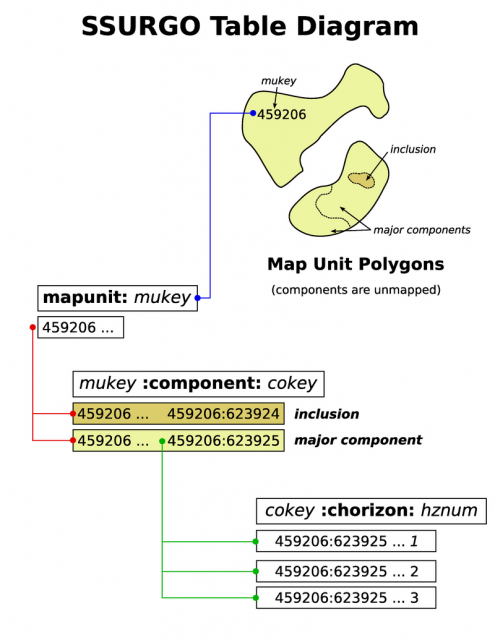